This is a great question. One I have thought about for a long time. I feel like I have a pretty good idea now and I am going to lay out the case right here. I am attacking the consumption of a common food. I think if you are going to do this you need to make a strong case scientifically. We need very clear epidemiological data, mechanistic/metabolic pathway data and experimental/clinical trial data. Okay so now for the context.

The vast majority of times when people attack a common food they are only relying on epidemiological data or anecdotal data(their experience or a small group of case studies with no control). Epidemiological studies are looking for things that seem to be related or correlated. Correlation is also not causation. A really strong correlation can imply causation but it does not prove it. An experiment/clinical trial proves it. In an experiment/clinical trial you control for all of the variables and then you test how A affects/causes B. You also try to figure out the mechanism of how A affects/causes B. You develop hypotheses and you test it searching for the truth. The basic definition of science: the search for the truth through rigorous experimentation. You assume that you are wrong and you try to prove it with objective data. You constantly learn and reassess your hypothesis as new data becomes available.

Epidemiological data is considered weak scientific data. It is simply looking for correlation in a population, it is not very controlled and almost always requires self reporting over a long period of time(months or years). So even under the best case scenario it is still pretty flawed, uncontrolled and easily manipulated to the researchers biases or agenda. Lung Cancer is 15 to 25 times more likely to occur in a smoker then a non smoker. People who smoke are at a 1500% to 2500% greater risk of getting lung cancer then a non smoker. That is pretty significant and correlations above 800% imply causation. For something to be considered significant in an epidemiological study people who do A are at least 100% more likely to get B. Anything less than a 100% is considered noise due to the uncontrolled nature of epidemiological studies.

Have you ever felt that everything is bad for you? That there is research showing everything can cause cancer or heart disease? There are a lot of industry groups, political groups and religious groups that fund bad research to support their agenda. They have founded and or given millions of dollars to certain organizations to put out research that backs up their position. These biased studies are almost all epidemiological studies that are well below the 100% standard to be considered significant. In fact they usually are below 25%. For example, do you think meat is bad for you? I know I used to.

I was plant based for over 10 years and for some individuals it might be their most ideal way to eat. You can make several moral cases for eating plant based. I think these organizations should make their case morally and not push out bad science telling us everything is bad for us. By bad science I specifically mean an epidemiological study where they say that eating this meat gives you a 20% more likely risk of getting cancer and heart disease. If this were a clinical trial with all the variables controlled that would be meaningful but for an epidemiological study it is not. This is way below the 100% threshold to be significant and depending on how you filter the data you could show the opposite that eating meat lowers your risk of cancer and heart disease. This is where bias and agenda comes into play. Less than 100% increase means no significant correlation and almost certainly no causation. For something to be considered significant in an epidemiological study people who do A are at least 100% more likely to get B. Anything less than a 100% is considered nonsignificant.

What is a chemically altered man made unstable fat? It is a substance made in a lab/oil refinery using chemicals like hexane, bleach, other industrial solvents and really high heat over multiple stages. The shape of the molecule, the locations of the double bonds will be different then a naturally occurring fatty acid. This creates a more unstable fatty acid molecule that does not exist in nature. Since it does not exist in nature we have not evolved the enzymes to properly metabolize it. We are inefficient at burning it as fuel, it causes problems with our mitochondria and we end up storing a lot of it in our adipose tissue. This unstable molecule also breaks down in our bodies over time producing several really nasty by-products. These specific by-products can cause heart disease, cancer, diabetes, obesity and a bunch of other stuff. Yes the hypothesis is this one thing really drives all of that and I am going to lay out the case right here.

Consuming foods made with unstable Omega 6’s is a problem

Vegetable oil is made in a lab/oil refinery using chemicals like hexane, bleach, other industrial solvents and really high heat. This process was invented as a way of creating something sellable out of industrial waste. It started with cottonseed oil in the 1860’s. But did not really pick up steam till 1909 when proctor and gamble created Crisco and marketed it to the American public as the new way to cook because it looked like lard. 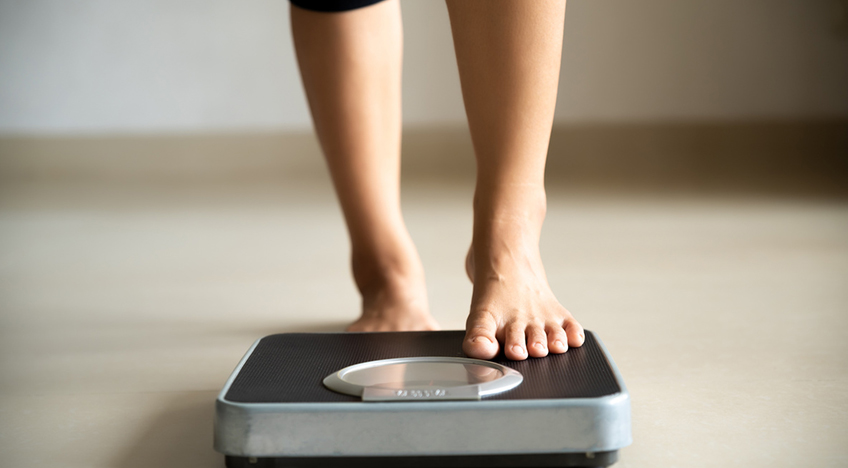 There has been a significant rise in the consumption of vegetable oil filled with unstable omega 6’s over the last 110 years. If unstable omega 6’s played a role in heart disease, cancer, diabetes, obesity and other diseases you would expect a correlation rise in those diseases as well during that time frame. Again correlation does not prove causation but a lack of correlation will rule out causation. So what does the epidemiological data show from 1909 to 2015?

Okay there is a strong correlation between vegetable oil consumption and the rates of cancer, diabetes, heart disease and obesity. This does not prove the hypothesis. There are an unlimited number of variables that could account for this. But it is present so we can move forward with our hypothesis. 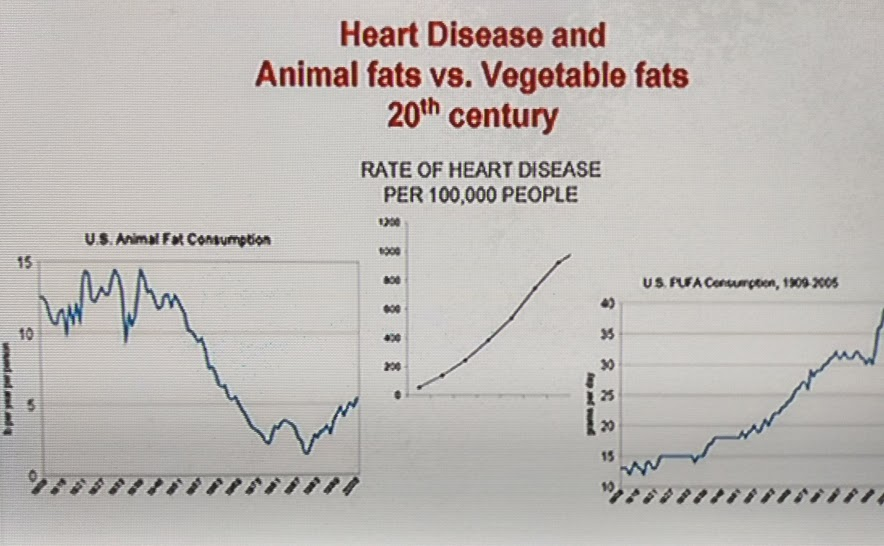 What about a mechanism?

How do unstable Omega 6’s cause problems in the human body?

Omega 3’s and Rimonabrandt encourage less fat storage through CB1 receptor site. In the expirement I linked below this paragraph the more unstable Omega 6’s they fed the animals the more obese they became. The group with more Omega 6’s gained more fat then the group that was fed more calories. The group that was fed Omega 3’s and 6’s gained less fat then the group that was fed just Omega 6’s. Omega 6 to Omega 3 fatty acid ratio plays a role in obesity and chronic disease. Traditionally that ratio was about 1 to 1. But since 1909 Omega 6 consumption has skyrocketed and most Americans' fatty acid ratio is closer to 15 to 1 Omega 6 to Omega 3.
https://pubmed.ncbi.nlm.nih.gov/12442909/

2. Their unnatural shape and instability cause problems in the mitochondria. Specifically the way they interact with the cardiolipin molecule leads to mitochondrial damage and dysfunction. Similar to trans fat. This mitochondrial damage leads to cell death, mutations, insulin resistance and the inability to metabolize fats. The inability to metabolize fats leads to an over reliance on carbs for energy (sugar addiction) and encourages fat storage (obesity). If you would like a really detailed explanation of this process please go to the 32 minute mark of the video linked below this sentence and Chris Knobbe, MD will walk you through it in great biochemical detail in 10 minutes or so.
https://www.youtube.com/watch?v=pHnPinYI2Yc&list=LL&index=3&t=1054s

3. These unstable Omega 6’s breakdown more easily in the body(rapid peroxidation). The breakdown into a group of compounds called Aldehydes. Aldehydes do a lot of terrible damage to your body. Aldehydes promote obesity, heart disease, cancer, neurodegenerative diseases and cell death. I am only going to discuss Acrolein and 4-HNE because 2 is enough to get the idea.

4-HNE or 4-hydroxynonenal is nasty, leads to cell death and genetic mutations. It has been directly associated with many diseases, heart disease, cancer, diabetes, Parkensons, and Alzheimers to name a few. It also accelerates the aging process.

Side note if you love french fries (I do) fry them yourself in beef tallow. They actually taste better if you can believe that! (anyone who ate McDonald's Fries in the 80’s remembers) Also no bad stuff. Here is a link to Malcom Gladwell talking about it. (It is safe to fry foods in unrefined peanut oil, beef tallow and duck fat)
http://revisionisthistory.com/episodes/19-mcdonalds-broke-my-heart

Okay so we have multiple mechanisms by which unstable omega 6’s cause obesity, heart disease, cancer and type 2 diabetes. What other clinical trial and experimental data is there that supports our hypothesis?

Here is an animal study where they fed animals various amounts of vegetable oil for 32 weeks. The more vegetable oil they fed them the more heart disease they got.
https://www.ncbi.nlm.nih.gov/pmc/articles/PMC6269634/

The LA veterans study showed men who eight unstable omega 6’s were 82% more likely to die from cancer. This was a clinical trial not an epidemiological study! And these results have been reproduced in other clinical trials.
https://pubmed.ncbi.nlm.nih.gov/4100347/

Obesity being caused by unstable Omega 6’s. In this study rabbits were fed vegetable oil and weighed 12.3% more then rabbits ate traditional rabbit food (the equivalent of 23 human lbs). What was really interesting was the rabbits who were fed vegetable oil were broken up into 3 groups and the only difference was how many times the oil was heated before being served to them. 1st group not heated, 2nd group heated once, 3rd group heated multiple times. The more times you heat vegetable oil the more unstable the Omega 6’s become. So if the hypothesis is correct we would expect the 3rd group to have gained the most weight because they ate the most amount of unstable Omega 6’s. The 3rd group gained 45% more weight then the 1st group.
https://academic.oup.com/jn/article-abstract/123/3/512/4723339

At this point I think I have laid out a pretty decent case based on scientific data that humans should not consume any unstable Omega 6’s.

Now for my closing argument I am going to use the information that most resonated with me emotionally.

Because if you are going to test a treatment on an animal it has to have that disease right? Can you take a guess at what the scientists do to reliably induce obesity, heart disease, diabetes and cancer in their test animals?

I think you know where I am going with this. They feed them vegetable oil and sugar. That’s it. That is all they have to do to quickly and consistently produce those diseases in animals. So researchers know exactly how to cause obesity, heart disease, diabetes and cancer in animals? Yes they do.

There are people who disagree with this hypothesis and that is fine everyone is not going to agree on everything. I think I have laid out a pretty solid case and the evidence speaks for itself. But I am going to finish with 3 very disturbing facts that support the hypothesis.

2. Humans who do not eat vegetable oil rarely get obesity, heart disease, and type 2 diabetes.

3. The more vegetable oil a society consumes the higher its rates of obesity, heart disease, diabetes and cancer.

If it looks like a duck, it quacks and has webbed feet…it's probably a duck.

Do not use these oils and try not eat anything made with them.